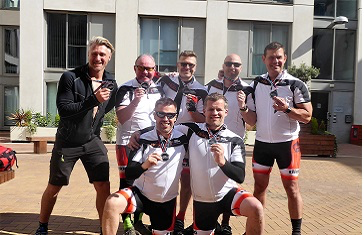 A cycling team who took part in the Velo Birmingham and Midlands cycling event have raised an amazing £3,687 for The Jordon Wilson Tribute Fund – Missing Limb to Cancer charity.

Said Dean: “We’ve all been training since February so that we could take part in the ride to raise as much money as we could in memory of Jordon.

“We can’t thank everyone enough for their support and generosity.”

Jordon’s father Paul Wilson is an Oakland International employee and all funds raised will now be donated via the Fund to two charities chosen by the Wilson family; the Bone Cancer Research Trust, which provides research in relation to this rare disease and Reach Charity Limited, which helps children with upper limb differences.

Paul and Jayne Wilson commented: “We are absolutely overwhelmed with the money raised as this went above and beyond our expectations. We are so thankful to all involved in Oakland International and all who sponsored, as every penny counts with both of these worthwhile charities. Words can’t express how proud we are of all the support people have given in aid of Jordon’s memory and we know Jordon will be smiling down on us all knowing his passing was not for nothing and even if these funds help just one person then we have achieved what we set out to do as we only set this tribute fund up a few months ago and can’t believe the amount of support we have had from everyone to date.

“What Oakland International have done just shows what a fantastic organisation they are in supporting one of their employees’ personal circumstances, which goes along way and we will forever be grateful of the support they have given to not only Jordon’s Tribute Fund but to Paul as an employee.”

All donations are still welcome and you can donate via the team’s fundraising page: https://uk.virginmoneygiving.com/fundraiser-display/showROFundraiserPage?userUrl=Oakland-International&pageUrl=3 until the end of June.